Welcome to My World

This blog was created to keep you informed about new projects, and events coming up.

Man!You blink and the summer is gone! So much to write about, so let me just say that its been a great summer with a couple of movies short and interview by Neworldtv.com, and the Emmy's!!!!

Got my first fight choreographer credit shooting “A Close Shave.” this summer. Nothing crazy, but a lot of fun directing the other actors.

Here is this weeks activities:

I got the news last nigh that I have an audition for a recurring role on Royal Pains this morning!! Wish me luck!
Also had a good audition yesterday for Ralph Ellison's The Invisible Man, produced at Boston's Huntington Theatre. A play I was in rehearsals for at Looking Glass Theatre got canceled last week, so I needed good news! . . . and that is another story that I will write about later.
Posted by Kwasi Osei No comments:

Aww sookie! The Short film PUMPS is finally here. A fun little comedy I worked on last year as a part of a 24 hour film project. It had to be filmed and edited in 24 hours, so it was a bit tight, but we had a lot of fun. 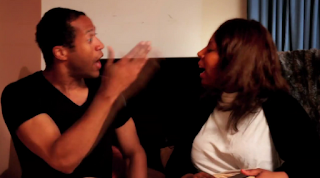 Posted by Kwasi Osei No comments:

I was on-set on The Good Wife earlier this week and was chatting with Allan Cummings. Everybody knows that he is a great actor, and one of the reasons that I'm a big fan of his is that every chance he gets he gets involved with theater. He is doing a one man production of Macbeth at the National Theatre of Scotland this Spring after the Good Wife season wraps. Luckily for us he will bring the production to New York from July 5th through July 14th as part of the Lincoln Center Festival.

So get your tickets fast, that sucker will sell out faster than a cold beer on a hot summer day!!

Posted by Kwasi Osei No comments:

New Year and a lot of activity. I had the pleasure of attending the Telsey + Company's auditions for the upcoming Broadway production of "A Street Car Named Desire". It was a great experience and hopefully the first of many at T + C.

Ben Gazzara died earlier this month. I had the honor of watching Mr. Gazzare work in a production of Clifford Odets's "Awake and Sing!" on Broadway in 2006. Among his long career in theater and film he played Brick in the original “Cat on a Hot Tin Roof” on Broadway. We are slowly loosing a whole generation of giants that help shape American theater as we know it. As an actor its important to look at the legacy that the generation of the "Golden Age" have left us.

Amazingly enough the original cast of Awake and Sing! included Stella and Luther Adler, Morris Carnovsky and Sanford Meisner. All of these actors came out of the Actors Studio who's work was about the pursuit of a deeper and richer form of acting.

How do we get back there? It seems like most of the movies being produced these days are about profits with little attention to storyline or quality of the acting. Yeah, yeah, I know, that's also what Stanislavski said 90 years ago (but seriously), who would you cast today to act in God Father, Kramer vs Kramer, Who's Afraid of Virginia Wolf, Dear Hunter, Street Car Named Desire, ect.

Let me know what you think, even if you don't agree. How do we get back to a focus on acting and storytelling?
Posted by Kwasi Osei No comments: